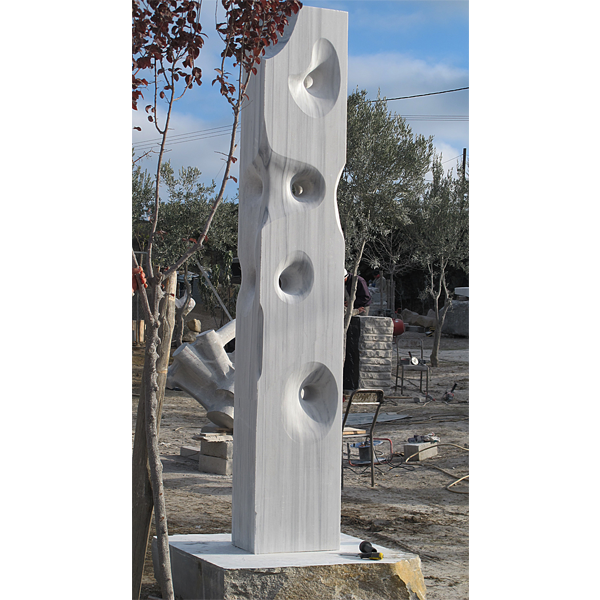 There is a very special sentiment you develop when you are introduced to something from its birth; and the birth of an artist is a fanatically most strong feeling when it comets to sculpture. In the case of Giorgos Spiridonov, both personally but also as a company of people we are all those who work for the Greek Marble Initiative, we have witnessed the born of a gifted sculptor from a keen technician.

To take the things from the start, Giorgos Spiridonov used to be our Technical Assistant, a function he still holds, but its rather diminutive to call him that any longer. He used to be one of us, of the Organization in the Symposiums of the Greek Marble Initiative, but now he is also a sculptor, but not only that. He is a sculptor who found himself here, before our eyes.

Based on an excellent understanding of the material, of stone, of marble, and a vast experience and deep knowledge of the mechanical tools used to chisel marble, he evolved under the influence of great masters we accommodated in our symposium, from all over the world. Jhon Gogaberishvili, Giorgie Cpajak, Edward Fleming, Kamen Tanev are some of the exceptional people influenced the young man.

Starting off his journey in creation he copied a Cycladic art head. This is an actual finding, situated in the National Archaeological Museum in Athens, re-created into yellow softstone. The next piece is a mighty panther, lying down. Though this is also a copy, we observed a tendency towards abstraction, as several figurative elements are missing on purpose. “The column” is a dive into the comprehension of modern art; more abstraction is evident while no figurative elements are pursued. As the artist Giorgos Spiridonov confessed to us it is a depiction of the spiritual elements of the universe as they transform into various energies. “The machine” series depicted as various gears was the result of a process of creating an environment of elements. One can find gears in every corner or place all around the field where the symposium is taking place. Geometry gained on the vital place the abstraction left in his creations. A huge human head, straying in style into the borderline between the Easter Islands giants and the Soviet era political monuments, bearing an influence mark of Georgie Cpajak with whom the young technician has being working along for sometime. It is a solid, vigorous, though somewhat wounded by time and elements of the Nature head, made in a quite banged stone. The archaic figure does not constitute a backward movement for Giorgos Spiridonov, but it is rather a first glimpse of his forthcoming choices